Every book, article, and pamphlet I have read on parenting says the same thing: consistency is important – children thrive within boundaries, and routines are essential.

It’s not that I disagree… it’s just… well, sometimes “caving” is just as necessary. I have yet to read any literature that endorses “caving,” but I’m going to   SHOUT it: SOMETIMES GOOD MOMS AND DADS GIVE IN!

Today I took the kids to the mall. Rex had won a prize pack in a drawing and we went to pick it up. Exciting stuff for an almost three year old! Not so exciting for his little sister. The nice lady who gave Rex his prize offered Sydney a sucker. Let me be clear, this was not my “caving” moment. While a sucker is not something I would have allowed Rex to have at 16 months of age, she is my second child and I am  no longer one to scoff at a treat that guarantees 15 minutes of contentment. She squealed and started sucking happily. We then decided to go to the indoor play area…

I couldn’t fathom allowing her to toddle around with a sucker so I decided it needed to go ba-bye. I  pried it out of her death grip and the shrieking started. She threw herself to the floor and screamed in a way that frightened other mid-trantrum toddlers.

I felt other parental eyes searing into my head. I could “hear” the questions conveyed by their eyes. “What’s she gonna do? Is she gonna stand her ground? Is she going to march that little tyrant out of the play area, strap her flailing, screaming body back into the stroller and go home? Who is going to win?”

I wrestled with these questions for [what felt like] 5 minutes [though I’m sure it was closer to 22 seconds].

Here’s the thing. While I wrestled with my choices [stand my ground or cave], I felt myself escalating. My face felt hot, my shoulders were up around my ears, and my hands were clenched. My choices weren’t so much “stand my ground” or “cave”…they were more like “stand your ground now and later explode in the car” or “cave now and NOT turn into scary mommy later.” Honestly, given the two choices, the latter seemed the lesser of two evils.

So, while I acknowledge that consistency is important, I also feel [with great conviction] that sometimes “caving” is just as necessary.

Sydney got her sucker, I kept my sanity. We both won :). 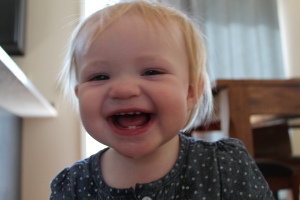